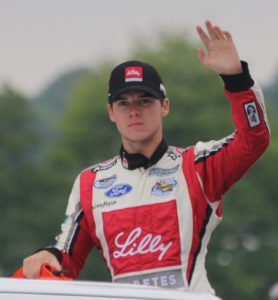 Elite athletes have strict fitness routines and carefully calculated diets, and although Nascar drivers are more stationary, they still have to be in top physical condition. Drivers face strong G-forces and have to quickly manually shift so it’s important that they regularly do intensive cardiovascular, upper body, core and leg exercises. A Nascar driver’s overall health makes a big difference on their success on the track, but driver Ryan Reed recently faced a health challenge that threatened to end his Nascar career.

Ryan Reed started racing at a young age and won the Kid’s Kart Track Championship at only four-years old. In 2010, he was named Rookie of the Year in the Super Late Model Division at Toyota Speedway at Irwindale, but in 2011 he received news that his career may already be over. Reed was diagnosed with type 1 diabetes and told he could no longer race. By working with doctors, his personal trainer, and support systems like his pit crew, Reed has been able to continue driving and also successfully manage his diabetes. He later founded Ryan’s Mission, a non-profit focused on encouraging diabetics and raising awareness about diabetes.

Reed’s story exemplifies how important it is for diabetics to have a strong treatment management plan for their condition. He saw his condition as an opportunity instead of an obstacle; Reed is now the driver of the No. 16 American Diabetes Association Drive to Stop Diabetes presented by Lilly Diabetes Ford Mustang. How does your story compare to Reed’s? Did you overcome an obstacle by implementing a better diabetes management plan? Share your story in our comment section!