Amay Bandodkar, graduate student and colleagues in Professor Joseph Wang’s laboratory at the NanoEngineering Department and Center for Wearable Sensors at the Jacobs School of Engineering at the University of California, San Diego, developed the sensors in the temporary tattoo. The sensors emit a mild electrical current that measures glucose levels. The electrodes are printed on tattoo paper that gives the user a painless way to test their blood sugar. The tattoos last a day and only cost a few cents. 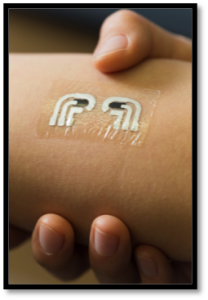 A closer look at the temporary tattoo that measures glucose levels.

The tattoo was tested on seven healthy male patients that do not have diabetes. Although the tattoo recorded a change in their glucose levels, scientists had to remove the tattoo in order to collect data because it doesn’t currently provide the patient with a way to read or monitor their own glucose level. In the future, the tattoos will connect with Bluetooth so data collected by the tattoo can be transmitted to the patient’s doctor or stored in the cloud. The technology used in the tattoo could eventually be used for other medical purposes, like delivering medicine or identifying important metabolites.