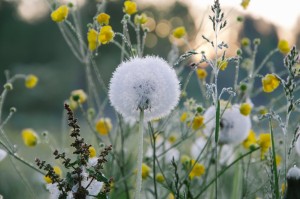 There may be a link between climate change and an increase in seasonal allergies.

One unique and popular way to usher in spring in the Triangle area is by attending a movie on the lawn at the North Carolina Museum of Art. Thousands turn out with picnic baskets in tow to enjoy a favorite snack while watching a film under the stars. That’s one of the best parts about spring—the ability to enjoy the outdoors in the deliciously warm weather. Whether it’s at a movie on the lawn, a walk on the greenway, or a game of Frisbee in the park, outdoor activities rule. One aspect of spring that I could do without though is the sneezing and the itchy, watery eyes caused by seasonal allergies.

If you feel like your allergies have gotten worse in recent years, you’re not alone. Many scientists believe that there’s a link between climate change and an increase in seasonal allergies since plants have started blooming earlier in the season and continue releasing pollen longer. Scientific research suggests that one very common allergen—ragweed—has increased due to higher temperatures and increased levels of carbon dioxide. A warmer climate also means higher ozone levels. Ground-level ozone caused by pollution can exacerbate asthma symptoms, especially during the ozone forecast season that runs from April through October.

Yet many scientists are also hopeful that the pendulum may soon start to swing the other way on climate change. There’s been a lot of buzz in the media recently about the Paris climate change agreement. Many are hopeful that stronger environmental goals will combat global warming. This climate change deal in combination with the Clean Power Plan, which President Barack Obama announced in August 2015, could also be beneficial in reducing the impact of seasonal allergies on asthma sufferers. The goal of the Clean Power Plan is to reduce power plant emissions by 32% by 2030 which could reduce as many as 90,000 asthma attacks in children by 2030.

It’s of course going to take some time for these climate change plans to go into effect, but asthmatics can take some immediate steps to lessen the blow of seasonal allergies. If you have asthma, make sure you have an up-to-date asthma management plan that you’ve developed with your doctor. This plan should outline which medications to take on a regular basis and what to do in the event of an asthma attack. You can also use one of these five free apps, like EPA’s AIRNOW and Allery Alert, to track air quality and allergy forecasts so you can better prepare for days with high ozone levels and peak pollen counts.