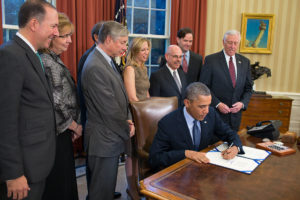 President Barack Obama signs H.R. 2094, the School Access to Emergency Epinephrine Act, during a signing ceremony in the Oval Office, Nov. 13, 2013. (Official White House Photo by Pete Souza)
This photograph is provided by THE WHITE HOUSE as a courtesy and may be printed by the subject(s) in the photograph for personal use only. The photograph may not be manipulated in any way and may not otherwise be reproduced, disseminated or broadcast, without the written permission of the White House Photo Office. This photograph may not be used in any commercial or political materials, advertisements, emails, products, promotions that in any way suggests approval or endorsement of the President, the First Family, or the White House.Ê

On November 13th, President Obama signed into law the School Access of Emergency Epinephrine Act, legislation that helps protect schoolchildren who experience anaphylaxis, a life -threatening allergic reaction. The new law provides funding incentive to states that enact laws allowing schools to stock and administer emergency supplies of epinephrine auto-injectors. Food allergies are prolific in the United States. The potentially life-threatening disease is a growing public health issue, and a concern among those with asthma, as allergies can trigger asthma symptoms such as coughing and wheezing. The first line of treatment for anaphylaxis, epinephrine narrows blood vessels and aids lung passages that are more susceptible to inflammation and swelling, which leads to shortness of breath, coughing and wheezing. The epinephrine auto-injector is used to deliver measured doses of epinephrine by a spring-loaded syringe.

The new legislation will help save lives of children who may experience an anaphylactic reaction for the first time at school or don’t have an epinephrine auto-injector available when anaphylaxis occurs. There are states which have legislation either requiring or allowing schools to stock and administer emergency supplies of epinephrine auto-injectors, North Carolina is among the 22. The state of North Carolina recently made Asthma and Allergy Foundation of America’s Honor Roll by meeting several of their core policy standards. Of the core standards met, providing emergency protocols for asthma and anaphylaxis are among many standards upheld by the state.